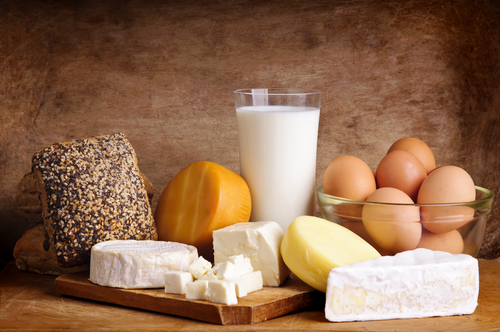 When I was diagnosed with cancer in 2003, I came across a book called ‘Your Life in Your Hands’ by Jane Plant.[i] This highlighted Jane’s own success with a no-dairy diet in the remission of her cancer. She reasoned that Chinese populations had a very low rate of breast cancer compared to the West, and theorised that their lack of dairy was a potential cause of this. She reports that within 6 weeks of her new diet the lump in her neck had receded and she was cancer free within a year.

Jane’s experience is enormously inspiring, and whilst it is great that this worked for her, is it right to write off dairy completely, all of the time? It’s worth mentioning that there are many other foods that rural Chinese people also don’t eat – like most of the refined and high sugar foods which are now so prevalent in a western diet….

I initially followed Jane’s advice, and I’m glad that I did, but I now have a broader view too:

Digestion & intolerance
A key indicator that you should try going dairy free is if you have underlying health issues such as asthma or skin problems, digestive issues such as bloating, constipation or diarrhea, or excessive mucus. These issues often relate back to gut health, and whether you have a foul bowel or a well-functioning system. An overgrowth of unfriendly bacteria will mean that lactose, the sugar in dairy, ferments in the digestive tract, causing problems.

This may be caused by a lack of digestive efficiency, gut dysbiosis (disruption of the normal bowel flora), or a deficiency of the enzyme lactase (a genetic consequence).

People with a family history of coeliac disease may also need to be cautious, as milk can be cross reactive with gluten. The milk protein casein is similar in structure to gluten and can invoke an immune response similar to gluten exposure. Around 50% of coeliac patients are also sensitive to dairy.[ii]

Whilst it is important to resolve digestive issues (unless arising genetically), milk products can be made more digestible by fermentation. This involves the action of good bacteria on lactose, the milk sugar and was historically used as a preservation method. We are all familiar with yoghurt which contains probiotics. Kefir is another probiotic milk drink with amazing health benefits. In addition to good bacteria, it is rich in vitamins, minerals and amino acids.

Hormones
There is concern about the oestrogenic activity of dairy products, particularly of cow’s milk. Indeed when cow’s milk was introduced to prostate cancer cells in vitro, a 30% increase in tumour cell proliferation was noted. This was also the case for soya. However, almond milk exposure resulted in a 30% decrease in cell activity.[iii] Fortunately, there is now a wide range of nut milks available on the market, and they are also very easy, and quite delicious, to make at home.

Goat and sheep products can also be a good choice from a health point of view. In a study comparing different milks, goat was found to be significantly less oestrogenic, with the authors concluding “Goat milk represents a better dietary choice for individuals concerned with limiting their oestrogen intake.”[iv]

Goat’s milk is generally regarded as easier to digest than cows and many practitioners report this to be the case in clinical practice. Reasons for this may be the lack of a protein, alpha S1 casein, in goat’s (and human) milk, or the smaller fat globules in goat’s milk.

Nutritional Value
From a nutritional point of view, dairy is an excellent source of protein, which is one of the key reasons I advocate some goats and sheep’s products like cheese or yoghurt, provided they are well tolerated. It can be a convenient contribution to a fast meal, and many people really enjoy the creamy texture and taste. Think Roquefort melted over pears and mixed into a salad, or a goat’s cheese spread on crackers and topped with mango.

Dairy is also prized for its calcium content, but I find this to be less compelling, as there are many alternative calcium sources, and these foods often also have a superior magnesium level too:

So, in a nutshell, consider significantly reducing or eliminating cow’s dairy from your diet, unless you are using it in fermented products such as yoghurt or kefir and then only choose organic. There are now plenty of non-dairy milk alternatives readily available in the supermarket, from coconut to almond and hazelnut. Coconut cream is great for a more creamy texture. You may also like to include moderate amounts of goat’s and sheep’s cheese and yoghurt, unless you find that these products don’t agree with you, in which case they can be avoided.